Raseborg castle, located in Western Uusimaa in Southern Finland, is my favorite of the Finnish medieval castles. It was in use for such a short period that there aren't any quite new constructions and reconstruction has taken place with moderation. However, the round tower has been slender and thinner originally than the current tower restored in the 19th century. While walking on the ruins you can almost feel the ancient souls wandering there when the night falls. Also the environment around the castle is peaceful and not built-up. The castle of Raseborg is a kind of a home castle for me because I live in Espoo that is at the Eastern end of the castle's old administrative region. Our summer place is at the Eastern end of it and I have some family roots in the middle. 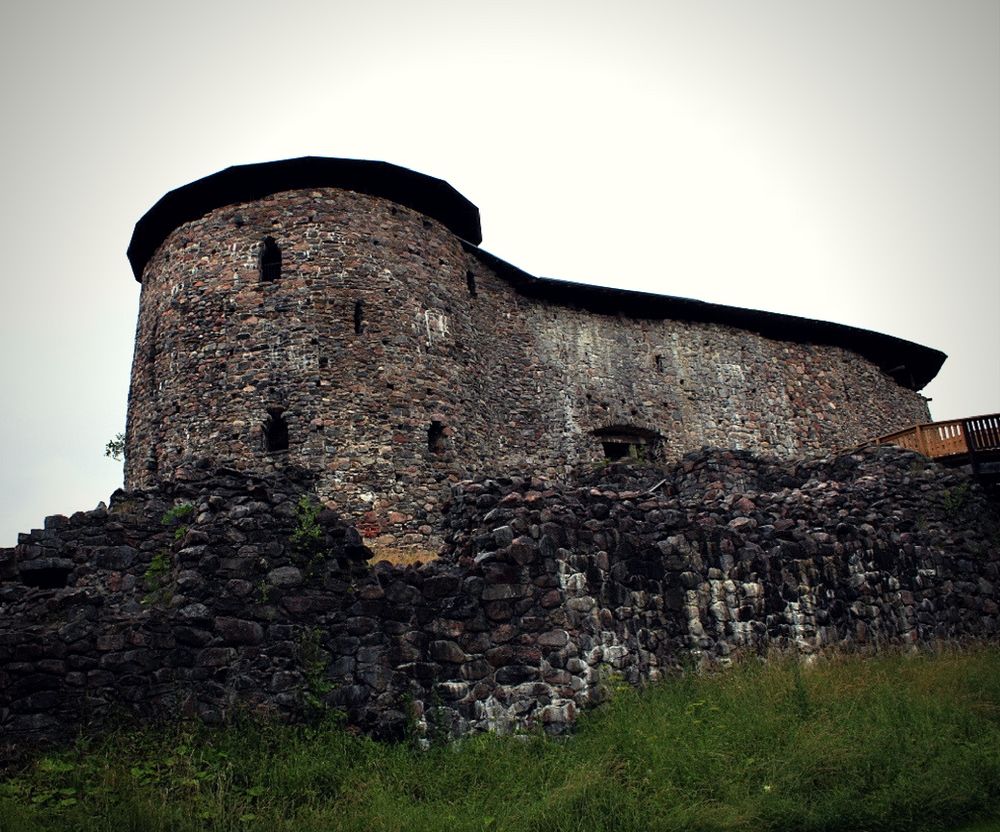 There are three women associated with the history of Raseborg castle: Christina Abrahamsdotter, Karin Viffert and Katarina Nipertz. One of them probably never set a foot in the castle, though. And of course, there are a lot more women in the history of Raseborg, but as the historical data of men are scarce there is even less information about women.

Mistress, wife, widow... Women in the Middle Ages were usually defined through men. Information about these noble women of Raseborg can be found only through their husbands and there is not much information. When widowed it was possible even for a woman to act independently

Foundation of the castle

The Raseborg castle was founded by the Swedish crown and Bo Jonsson Gripp in the 1370s. It was established on a cliff on easily defendable inner islands in what is today the town of Raseborg. Today the castle is on dry land. Vestigial but beautiful Raseborg river flows by the castle.

Gotland was an important Swedish commercial center in the 14th century but the Danes conquered it 1361 and after that the trade of the Baltic Sea was concentrated in Tallinn. The Raseborg castle was established probably to balance the trade in Gulf of Finland. It was important that the castle was easily defended because the time was restless due to wars and pirates.

Sometime after the death of the founder, Bo Jonsson, the castle ended up under German occupation for a few decades at the beginning of the 15th century. In the middle of the century, the castle experienced three decades of heyday. In 1438 whole Finland had been feudalized to Carl Knutsson Bonde. In the time of continual games of thrones and speculations, Carl was the king of Sweden for three times. After he had to give up the crown for the second time he was namely still a king and chose to live in Raseborg in exile. So for two years, there was a royal court at Raseborg. It is likely that it was Carl who built the living quarters located in the east and west sides of the castle.

Carl was a widow when he moved to Raseborg and while living there he met Christina Abrahamsdotter who was about twenty years younger than him. Christina was born in 1432 as a daughter of Abraham Persson who was a governor of the western district of Raseborg. This Finnish woman, also called Rose of Raseborg, started an affair with the king. They got two children called Anna and Karl.

When Carl for the third time in 1467 was crowned again Christina followed him to Stockholm as a royal mistress with their children. Carl died in 1470 but a few weeks before that he married Christina. So Christina became a queen of Sweden for a few weeks. Before his death, Carl had time to change his will for the benefit of Christina and his son. The marriage wasn't generally approved and after Carl's death, a man called Sten Sture took the power and overrode the will. Later Karl managed to claim his inheritance what came to personal estate.

There's not much information about Christina after this. She died in 1492 at the age of 59 or 60. Christina was the only royal mistress in Sweden to become the queen alongside with Karin Månsdotter (1568).

When Carl returned to Stockholm in 1467 Raseborg was given to Danish Lars Axelsson Tott. Lars's wife, Karin Jönsdotter Viffert was supposed to travel to Raseborg by a large ship steered by Hanneke Vrome. The ship left Lübeck after the 11th of November 1468 with large amounts of cloth, honey and 10 000 gold Guilders. There were 180-240 people on board. The trip had been delayed to late autumn because there was a war between Sweden and Denmark and pirates called Victual Brothers were raging on the Baltic Sea. They hoped that the Danes and the pirates would be already winterized. For this reason boats also sailed in groups and had solders to defend them. Karin stepped on board with her son in Stockholm.

One of the three ships stayed in Stockholm and two continued their journey. Pirates they didn't face but an autumn storm arose when they almost had reached Tallinn. Hanneke Vrome was blown by the strong wind to the Finnish coast, near Jussarö, where the ship fell and sank quickly taking the cargo and passengers with her. No one survived from the wreck.

The accident was a great shock in the Baltic Sea area, just like Estonia ship, that travelled the same route, 500 years later. The following year, Lars Axelson went to search the place of the wreck and found it. They were also able to lift part of the cargo. A church that was under construction in Karjaa was named after Saint Karin and a memorial monument for the drowned was built in Lübeck.

After the death of his first wife, Lars Axelsson married Katarina Eriksdotter Nipertz. Katarina was a Swedish noblewoman and the marriage was the second one for her too. They had two children. After Lars died in 1486 Katarina took the control of Raseborg castle and county until 1487. That year Sten Sture decided to attack the castle. Katarina defended it for several weeks until gave in and Sten Sture took over the castle. I think she died in the same year, in about 50 years of age. Katarina was the only woman who governed Raseborg castle.

Final stages of the castle

After the rule of Sten Sture, the castle was taken over by the Danish after bloody struggles for power and a couple of men even lost their heads on a hill near the castle. In 1520s supporters of Gustav Vasa conquered the castle back from the Danish. However, the castle was badly damaged and even though they tried to renovate it at first, Gustav Vasa finally decided to abandon it. Because of the post-glacial rebounding, the location was no longer advantageous either. Helsinki and Tammisaari were founded to replace Raseborg.

Raseborg castle was left in peace and to revert to forest for about 300 years, until it aroused interest again and renovation started. Today the castle has been reconstructed as much as it is possible.

(Original article 14/9/2016) The weather was perfect when we headed to Gamla Uppsala, north from...