Stone Age human images or anthropomorphic figurines found in Finland are the images of rock paintings, amber pendants in a form of a human face, clay figurines and some single sculptures or objects representing a human.

The Stone Age human and animal images and figurines are usually thought to be related to the beliefs or religion.[:]

The knowledge about the old religions in the area of Finland is based on the information about the forager people living nearby and oral tradition. Archaeological material like the rock paintings, figurines and burials are also part of the research material.

Based on these, it is believed that the ancient Finnish religion was animistic. In animism, everything has a soul or a spirit: people, animals, plants and also abiotic things like rocks and cliffs. Especially, the formations with an extraordinary appearance, like the human form, were probably worshipped.

The primitive forager people believed that people had three souls:

1. the soul of a body that maintained the life

2. the free soul that contained personality and consciousness; this could leave the body for example during the sleep

3. the "haltija" soul that maintained the well being of the person 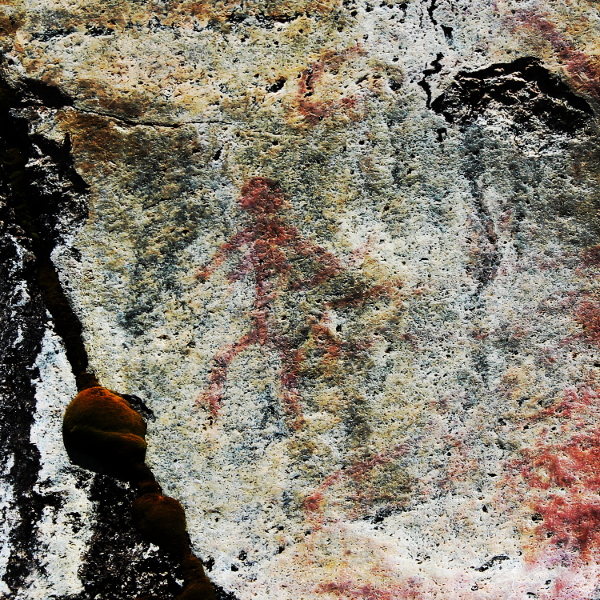 The most common subjects of the rock paintings are the moose and people, also other animals are pictured frequently. Human-related pictures are simple stick-like people and handprints. In addition, there are boat images with people sitting in them.

A few pendants made of amber and representing human heads have been found. Three of them were discovered in front of Astuvansalmi rock painting panel in the water. These pendants have been assumed to picture some kind of deity.

The holes of the pendants were in the bottom part of the face so they were probably worn upside down on the neck. This might have been because when held in the hand the face would have been the right side up to the person who wore it. Or maybe these represented ancestors who lived in the underworld and thus would have been upside down.

In addition to the amber heads and paintings, the rock itself at Astuvansalmi resembles a human profile (see the picture above), so it is probable that this place was an important cult centre once.

Clay figurines depicting people and animals have been found at Neolithic Comb Ceramic dwelling sites. There are three types of figurines:

1. Paimio type of the earlier Comb Ceramic Culture: characters have incised decoration, holes for the attachment and traces of red ochre. These are always broken when found.

2. The later typical Comb Ceramic clay figurines can also be animals. They depict only the head and the rest of the body is bent, like a worm.

3. The Åland Pitted Ware Culture figurines represent more naturalistic people. They have incised lines, punctuates, holes and traces of the red ochre. These too are always broken.

A wooden deity of Pohjankuru

At the end of the 19th century, a wooden human image was found near the Pohjankuru station in Raseborg. This is the only wooden human sculpture of the prehistoric time preserved in Finland.

The face of the image has been carved into a pine trunk. It is believed that the face once was a part of a pole which has counterparts in the Ural region. The sculpture is dated to the Comb Ceramic Stone Age.

The axe dated to the end of the Stone Age with a human face has been found in Kiuruvesi, Northern Savonia. The axe is finished carefully but the face is suggestive. It is likely that the axe was not meant for the use but was an offering left in the water.

The beliefs reflected in the human images

The human figurines and images of the Stone Age are always very suggestive and lacking personal features. These images are likely to be related to beliefs. They represent gods, dead ancestors or shamans.

Generally, the human images of the rock paintings are believed to represent shamans or spirits. According to the shamanistic interpretation, these are shamans and some of the animal characters picture the spiritual guides of the shamans. The shaman was able to transform him/herself into an animal and travel to the underworld in the form of this animal. Because the moose are prey animals it is likely that the rock paintings have something to do with the hunting rituals.

If the human characters represented spirits or deities the horn-headed person could be the god of forest and hunting called Tapio. It would fit the hunting theme with the moose. The character with breasts and a bow in the hand could be Mielikki, the mistress of the forest. Sometimes this character is called Tellervo who is a daughter of Tapio and Mielikki.

Risto Pulkkinen (the author of "Suomalainen muinaisusko" about the Finnish ancient religion) has proposed that the characters in pairs can represent humans and their souls, haltija souls that could leave the body. Sometimes the human characters are upside down so they might be souls of the dead. Or they can represent shamans visiting the underworld. In the underworld, everything was wise versa and upside down compared to the world of the living.

It has been proposed that clay figurines picture ancestors, the dead, deities or are toys. The clay figurines of Åland clearly representing women or men are decorated with lines and dots than may depict clothing, body painting or tattoo. Some of the figurines have marked breasts. Milton G. Nunez has pointed out a connection between the patterns and the clothes of Siberian shamans. The faces are disc-like and it's been thought that that represents a death mask made of clay. But as well it could also be a mask of a shaman.

The Åland dwelling site Jettböle has also revealed traces of mutilation. Human remains have been treated like animal bones. Bones have cut marks that can be related to the death rituals and not necessarily mean cannibalism. This has been an inspiration for the interpretation that clay figurines always found broken would represent dismembered bodies. Most probably, the breaking has had some ritual meaning. Maybe it has something to do with the belief that everything that is broken in the world of the living is unbroken in the underworld.

Some of the anthropomorphic figurines and objects have been offerings to the gods thrown to the water. These kinds of objects have been at least the human-headed axe of Kiuruvesi and the amber pendants found in the water in front of the Astuvansalmi rock paintings.

Axes and hammers clearly had a mythological significance in the ancient religions around Europe. For example, fine battle-axes of the Corded Ware Culture were offered to some deity. Axes and hammers were the symbols of the gods of thunder like Ukko, worshipped in Finland and Scandinavian Thor.

It is quite difficult for a modern person to imagine what the worldview and life of a Stone Age people were like. Probably, life was a continuous dialogue with the spirits of nature through the help of rituals. The spirits were present everywhere and part of everyday life. Maybe, the tendency of a modern person to see faces in different places and objects comes from those days.

Reading:
CLAY FIGURINES FROM THE ALAND ISLANDS AND MAINLAND FINLAND, Milton G. Nunez (pdf)
Please follow and like us: