Last spring I purchased two dresses, one of them is a Viking style apron dress and the other one is an undergown. I'm not good at sewing so I had to order the dresses. But I wanted to make a Viking style jewellery set for the outfit myself. I didn't want to copy any original finds but was led more by imagination and esthetics.

The very first thing I did was a wish for a Christmas present of two tortoise brooches based only on a picture I saw. The brooches were ordered from Germany (PeraPeris) and I was surprised to find out that the original model brooches had been found in Saltvik, Åland, Finland. So that was surprisingly near. And later, I even found possibly the original brooches at the National Museum of Finland, or at least very similar.

The jewellery set of a Late Iron Age woman consisted of two brooches used to fasten the apron dress. Chains were attached to the brooches with chain dividers or connectors. Small utensils or charms were hanging from the chains. Between the two brooches there often was a central brooch, like the so-called equal-armed brooch in the picture above.

I absolutely fell for the bird brooch from the same shop as the tortoise brooches and wanted it for the central brooch. The original brooch is from Uppåkra, Scania, Sweden. Here you can see a picture of it.

Uppåkra was an important religious and political central place. There have been found 130 brooches similar to mine. They might have been robbed from the living or the dead and meant to be melted and reused. Or, the brooches might have been manufactured there. Any casting moulds haven't been found, though.

The brooches were of high quality, made of copper alloy. Some of them were decorated with silver, gold or gemstones. In some cases, there was a male face and band decoration on the backside. Sometimes the male face was on the front side like in the picture above. There were remains of the fastening pins in the brooches, but sometimes there was a hole in the tail. So, the birds might also have been worn as pendants.

Usually, the bird has been thought to be a raven, Odin's raven Huginn or Muninn. If that's the case then the male face would be that of Odin's. Another theory is that the bird is a bird of prey. There are remains of the falcons in the graves of the same period but not so many ravens have been found. According to the written documents, at least in Continental Europe, falconry was practised among the upper classes. I like the idea that the bird is a raven because I'm so fond of corvids.

I made myself the chain dividers or connectors that carry the chains below the oval brooches out of copper wire. In the Iron Age, these kinds of connectors were made out of metal wire but also by casting.

For the main bead strand, I chose a big green glass bead as a focal bead. The other beads are in addition to glass, made of clay and Baltic amber. The other strand has only glass beads in a hemp cord. 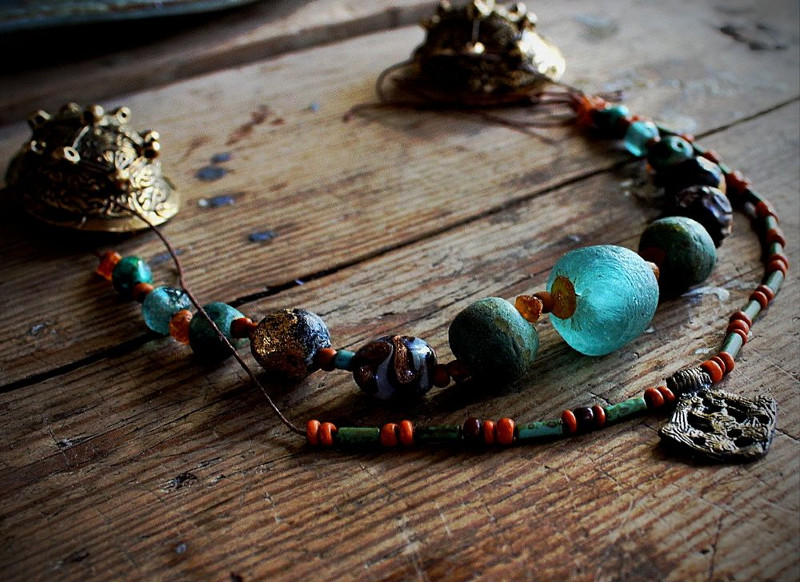 ]In the Viking Age beaded jewellery was made of glass as well as gemstone beads. I'm sure also other materials like bone, wood and clay were used to make beads but these haven't survived well and were not as valued. The dead were given only their finest jewellery.

The glass beads were imported from as far as Asia but they were also manufactured here in the North out of imported raw material. For example, at Gamla Uppsala, a workshop of a beadmaker has been found.

People used to fasten amulets and utensils like scissors, keys, needle cases, ear spoons (maybe used for cleaning the ears) and sometimes even knives to the chains. I decided to take the lighter way and hang only charms. A key is on my wishlist.

I purchased this charm from the museum shop at Gamla Uppsala. One of this kind has also been found at Gamla Uppsala, in a woman's grave. These kinds of amulets are thought to represent valkyries but they may also refer to some other female character like a goddess. Valkyries are mentioned in the Sagas. They were armed female divine creatures who chose the slain to the Valhalla after the battle, to Odin's hall of the slain.

The woman of the charm has a horn in her hand. This may depict a valkyrie who is offering a drink and welcoming the dead warriors to Valhalla. These kinds of scenes are shown on picture stones. Similar amulets have been found only in rich graves of women, women of the upper class.

The second charm is a so-called Freya pendant, interpreted to depict Freya. Freya is a lascivious goddess of fertility to whom women could turn in the matters of pregnancy and childbirth. She is familiar with the magic of life and death and teaches divination magic to other gods.

On the other hand, Freya is also a goddess of battle and the chief valkyrie. She travels in the chariots drawn by cats and wears cat skins. The German and Swedish words for a "lady" are derived from the name of Freya.

Also, this round charm strung with the beads is from Gamla Uppsala museum, like the other two charms above. I don't quite see what kind of charm this is. But I guess, it represents some animal ornament style, where the animals grip the edges of the pendant. 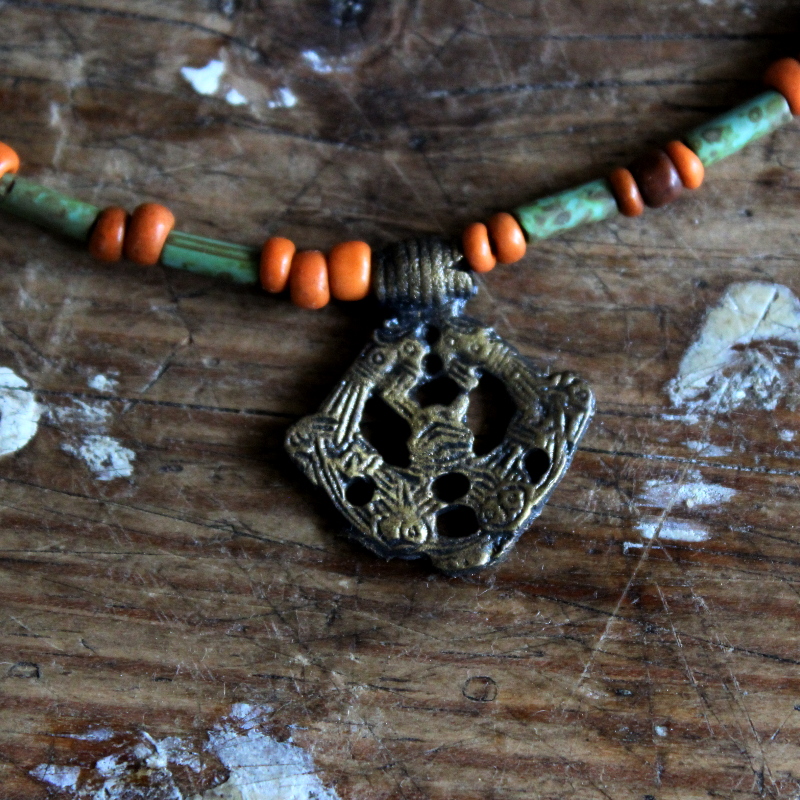 In addition to the three charms above, I added a cowrie shell to the jewellery set. They were worn as a part of the jewellery during the Iron Age too. They were imported from the Indian Ocean apparently along with the Viking trips. Here in the North, wealthy women wore the shells as pendants. In the Mediterranean area, cowrie shells were considered as fertility amulets and this might have been the case here too. Or, they may have had another magical meaning.

The last charm is a triple spiral I made myself out of copper wire. I'm going to replace it with a key if I ever get to purchase one.

During the summer, I had only a couple of chances to wear the jewellery, like at the Häme Medieval Faire, but I think there will be more someday. I like the bird brooch so much that I'm wearing it even with ordinary clothes. 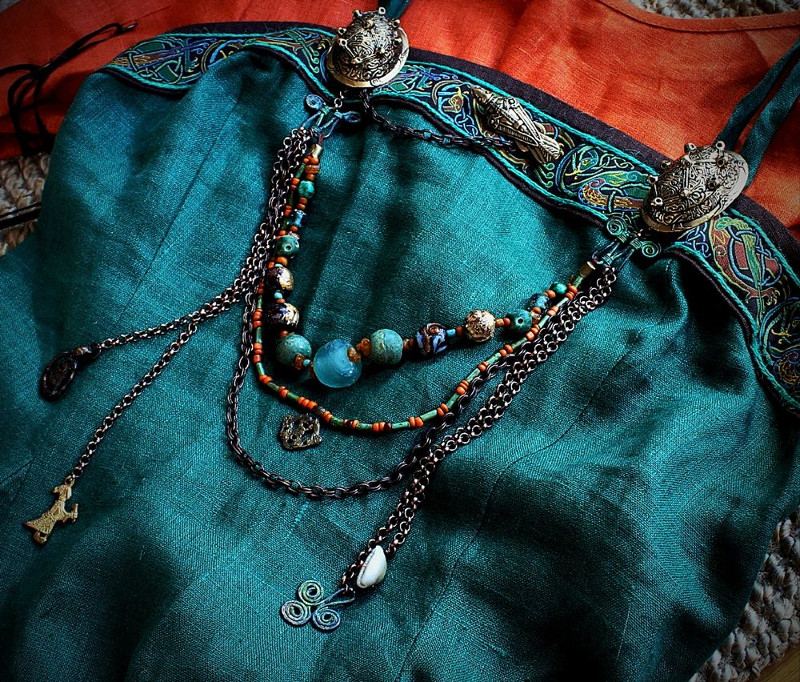 We call them Vikings. Ed. Gunnar Andersson. 2016.
Vikings, life and legend. Gareth Williams, Peter Pentz, Matthias Wemhoff. 2014.
The mania of the time. Falconry and bird brooches at Uppåkra and beyond. Kristina Jennbert. 2007
Exploring the world of the Vikings (Matka viikinkien maailmaan). Richard Hall. 2007