The weather was perfect when we headed to Gamla Uppsala, north from Stockholm last June after a day spent in Stockholm. I guess the sun is always shining in Sweden? Except in Nordic noir. I've been lucky this rainy summer with trips and happenings what comes to weather. Thank you for the weather gods for that! May a trip to terrible pagan cults, the world of little princes and priestesses begin.

Gamla Uppsala is located on the north side of Uppsala. There is a large ancient monument area that consists of great burial mounds, church and a museum. Originally there were more than 2000 mounds, 250 of them remaining today. This place was an important economic, religious and political central place from the 6th century onwards. Also, the thing (general assembly) was held here. Near the church of Gamla Uppsala, there is a mound with a flat top. It is believed that the thing was held on the top of this mound.

There is an area on the north side of the church that has been excavated recently and a base of a vast hall was found. Its length was 50 meters and width 12 meters. Several iron spirals were found at the site, that may have decorated the house. The building was destroyed by probably an intentional fire around the year 800.

Near this building workshops of artisans were found. Only in the area of 3 square meters a lot of glass beads and almost 600 pieces of garnet were discovered. So there must have been living an iron age jewellery maker, or at least a bead maker.

May a trip to terrible pagan cults, the world of little princes and priestesses begin

According to old written resources, Gamla Uppsala was a pagan cult centre. Adam of Bremen, a priest and historian who lived in the 11th century, tells about the rites where both men and animals were offered. The offering festival was held every nine years at the vernal equinox and it lasted for nine days. He tells us that nine males were offered from every species, one in a day, whose blood appeased the gods. Afterwards, the bodies of the victims were hanged to the trees. Adam himself didn't witness the offerings but his knowledge was based on hearsay. He also tells about a stunning temple named Uppsala that was built out of gold with three statues of gods to worship in it.

The church of Gamla Uppsala was built in the 11th century. However, older structures have been found underneath the present church, that may be related to an older church or more probably a pagan temple. After all, they used to build churches on old cult places to get rid of the old pagan habits.

The oldest burials of Gamla Uppsala are from the Bronze Age, but most of them are dated to Iron Age. The three biggest mounds are called Royal mounds. According to the tradition three gods were buried in them: Freyr, Thor and Odin. Later, it was made up that it was three kings that were buried there, that's where the name Royal mounds come from. It was not until the 19th century when they started to investigate the mounds, because someone claimed they were natural formations. However, both the west and east mounds revealed rich burials. The middle mound hasn't been properly excavated.

The mystery of the eastern mound

The mound called East mound is the biggest of the mounds. At the excavations, two cremations and pieces of objects were discovered. Among the pieces, there were fragments of the Vendel period (550-790) helmet, a fine piece of golden plate with filigree decoration. The plate may have been a part of a scabbard of scramasax (a fighting knife). In addition to these a mirror and a make-up pallet, fragments of glass dishes, bone comb, animal bones, claws of bear, gaming pieces and a small bone bird figure that might have belonged to a needle where discovered. The grave has been dated to the 6th century after these finds. Who was buried then in this kind of monumental size, 9 meters high, and richly furnished mound?

After the cremation, there were only bone fragments left of the deceased. A piece of a jaw bone and teeth, and also the size of the reconstructed helmet, revealed that the other person was only 10-14 years old. The other person was probably an older person. It has been reasoned on the basis of the artefacts that the young person was a boy and the older was a woman. The woman hadn't got her jewellery with her so it's been deduced that she was a servant (or a slave).

The boy's body had been cremated wearing a helmet and lying on a bear pelt. In addition to the fancy gold decorated scabbard, he got glass beakers, gaming pieces and other luxury items with him. He was possibly a member of a royal family, prince, at the funeral of whom three dogs, cattle, sheep and a hunting falcon, and maybe even a servant was offered to help him on his way to the otherworld.

To which one of the deceased the mirror and the make-up pallet belonged to is not certain, but the mirror refers to Eastern Europe and it is possible that the servant had come from there. It's been speculated that the mother of the boy could have come from there and brought a servant with her.

Cremating a body released the deceased to Valhalla. The Ynglingan saga tells about burial habits that Odin established the law according to which all men should be burned and their worldly belongings laid on the pile with them. Ashes were to be scattered to the sea or buried into the ground. All entered Valhalla with their belongings that were laid on the pile and the property they had buried in the ground while living. For the persons of significance a mound was raised and a standing stone for the ones who had distinguished themselves. 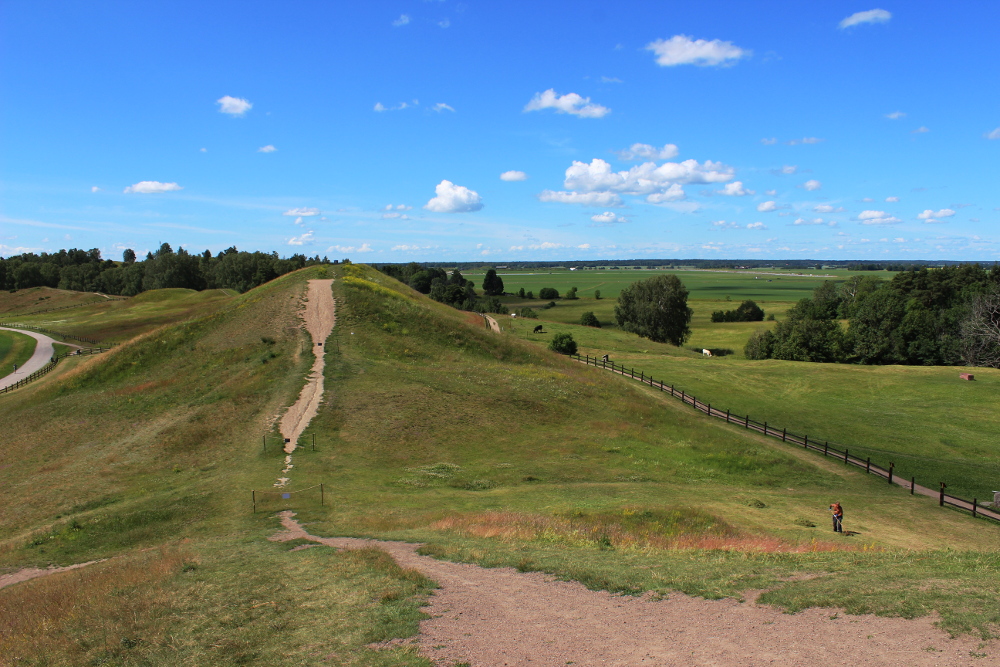 The view from the east mound

A woman dressed in silk

There is a rich Iron Age boat burial of an older woman put on display at Gamla Uppsala museum. The woman was dressed in silk that had come all the way from China. This generously furnished grave must have belonged to an important person.

The boat was 5 meters long. The woman was given her complete jewellery that consisted in addition to brooches, chain and knife of gorgeous beads and a pendant that depicted a woman with a horn. The pendant can represent the fertility goddess Freya or a Valkyrie, a creature that chose the slain for Valhalla in battle. It's been speculated that the woman had a role in the cult of Freya.

I could have spent a lot more time in Gamla Uppsala but the ship was leaving for Finland. If you go to Stockholm you should definitely visit also Gamla Uppsala, it is so near.